Geoffrey Craggs passes to the world of Spirit

We are delighted to announce the appointment of Nicolas Whitham to the STF’s board of trustees. 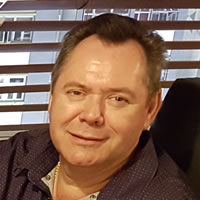 Nic was raised in a family of healers and for twenty years worked in investment banking. He subsequently established Banyan Retreat, a highly respected spiritual development centre in the Kent countryside. Nic is a Reiki Master and holds qualifications in a wide range of healing methods including Spiritual Healing, Indian Head Massage, Reflexology, Thai Massage and Bio-Energyfield Assessment.

Who was Silver Birch?

The much-loved guide answers this question in his own words. . .

Silver Birch is not my name. It is the name of the Indian spirit I use as a transformer that enables me to lower my vibration and reach your world. The name does not matter. I have not revealed the name I bore on earth because it has no value so far as I am concerned.

I am not a Red Indian. I belong to another race in another part of the world that goes back much further. I attained a a certain stage in my spiritual evolution where it seemed there was no necessity for me to return to the confines of your world.

We have what could be called a hierarchy. These are evolved spiritual beings – masters, if you like. Their task is to ensure the harmonious working of plans that have been made.

I was asked if I would forfeit what I had earned through evolution, and return as close as I could come to your world and act as a messenger for these evolved beings. My function would be to transmit their teachings so that those who were ready would be able to realise what we have to offer. I agreed to do so, and that is the mission upon which I have been engaged for a long time.

Had to learn English before communicating

I had to learn your English language. It is not a language which I spoke when I was on earth. I was told when I embarked on my mission that I would have to familiarise myself with the language you use, with its grammar and its syntax.

There was a problem because I required a medium to make contact with your world. I could not reach it myself because the stage of evolution I had reached was of a different vibration and not suitable for that purpose. I had to have what you call a ‘transformer’. They found for me the spirit body of a Red Indian that was suitable to be my medium for transmitting the teachings which are given to me to impart.

I am not going to tell you that the Red Indian civilisation, which if I may say so was superior to the white one, was free from all imperfections or cruelties. But to a large extent the blame must be laid at the door of the ‘superior’ whites who introduced the iniquities of the white one. There are no perfect beings. If you were perfect you would not be where you are now.

The Red Indians made their contribution. Their ethics and morals were high. They had their appreciation of nature, an understanding of the spiritual laws, the desire to achieve brotherhood among themselves; but they had their faults.

They were masters of psychic laws and understood their operation. They also had a greater understanding of spiritual laws. Like everybody else who comes to our world, they were confronted with the law of cause and effect. They received compensation or made retribution for whatever had happened in earthly life.

There is no exemption from the operation of natural law. Every race, every nation and every culture has its contribution to make in your world. It is like a mighty orchestra in which every instrument contributes its part to achieve the harmony of music which produces the greatest beauty.

What are considered the uncivilised and the lowliest have their parts to play in the great unfolding scheme. But whoever they are and wherever they may be, they are all spiritual beings. The essence of divinity runs through all of them and makes them one in a common family of the Great Spirit. Differences of colour, language, race and nationality are infinitesimal compared with the spiritual unity which is their fundamental basis.

I am not an infallible spiritual teacher who never makes mistakes and has achieved the summit of progress. That cannot be so, because progress is eternal. There is no period to perfection, because the more you achieve, the more you realise there is to be achieved.

The great value of what we have to offer is a sublime truth from the storehouse of divine wisdom and inspiration. We never ask you to take us on trust. We do not say that you must do what we suggest. Nor do we insist that there are no other ways by which you can obtain a greater attunement with the Great Spirit. What we do affirm, and with all the strength at our command, is that truths of the spirit an be tested by your reason, intelligence and experience. There is no threat of punishment if you say we have told you things which you do not accept.

The Great Spirit has endowed you with a measure of free will. You are not puppets. You have intelligence, reason, the ability to judge, to decide, to reflect, to form your own opinions and to be guided by the experiences that come your way.  Our desire is to win you and your co-operation through the assent of your reason. We do not want to offend it, because it is one of the gifts the Great Spirit has bestowed.

BigJumpApril2012
We use cookies on our website to give you the most relevant experience by remembering your preferences and repeat visits. By clicking “Accept All”, you consent to the use of ALL the cookies. However, you may visit "Cookie Settings" to provide a controlled consent.
Cookie SettingsAccept All
Manage consent

This website uses cookies to improve your experience while you navigate through the website. Out of these, the cookies that are categorized as necessary are stored on your browser as they are essential for the working of basic functionalities of the website. We also use third-party cookies that help us analyze and understand how you use this website. These cookies will be stored in your browser only with your consent. You also have the option to opt-out of these cookies. But opting out of some of these cookies may affect your browsing experience.
Necessary Always Enabled
Necessary cookies are absolutely essential for the website to function properly. These cookies ensure basic functionalities and security features of the website, anonymously.
Functional
Functional cookies help to perform certain functionalities like sharing the content of the website on social media platforms, collect feedbacks, and other third-party features.
Performance
Performance cookies are used to understand and analyze the key performance indexes of the website which helps in delivering a better user experience for the visitors.
Analytics
Analytical cookies are used to understand how visitors interact with the website. These cookies help provide information on metrics the number of visitors, bounce rate, traffic source, etc.
Advertisement
Advertisement cookies are used to provide visitors with relevant ads and marketing campaigns. These cookies track visitors across websites and collect information to provide customized ads.
Others
Other uncategorized cookies are those that are being analyzed and have not been classified into a category as yet.
SAVE & ACCEPT
Translate »
X